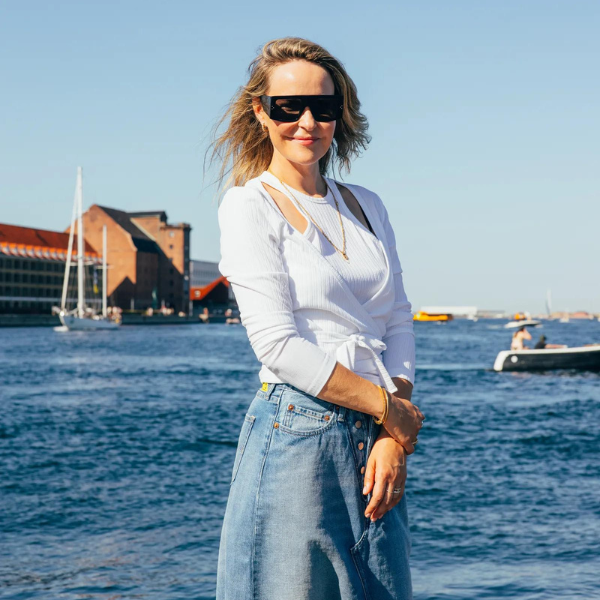 SERIE NOIRE: OVER 30 YEARS IN THE BUSINESS, AND A PIONEER IN THE WORLD OF LUXURY AND FASHION CREATION

In 1982 Olivier and Emmanuelle AXER established SERIE NOIRE to share their passion for design with their fashion-savvy clients. Since 1982, SERIE NOIRE has been a multi-brand concept store, specialising in the distribution of women’s and men’s ready-to-wear. From the beginning, we have always wanted to share the dream of an extraordinary experience in a singular universe of fashion designers across the generations.

SERIE NOIRE is still exclusively run by the AXER family, headed by daughter Prune who has been CEO since 2019. Prune sustains her father's objectives and safeguards the company's DNA while introducing her own vision. She has reinvigorated our spaces and further expanded our brand offerings.

SERIE NOIRE is a hybrid space where Fashion, Design, Culture and Art combine, a place where beauty is not inaccessible; rather, it is shared. Our appreciation and love for Art also inspires us to adorn our walls with works by contemporary artists

When Olivier and Emmanuelle AXER created SERIE NOIRE in 1982, they did not just establish a shop, but a place where art and fashion lovers could meet and share their common passions in a welcoming space. SERIE NOIRE was initially to be called "Tant qu'il y aura des hommes" ("As long as there are people"), it was the post-war series of novels called "Série Noire" which inspired the name; as a nod to the 5th Art, Literature.

SERIE NOIRE is more than a concept store, it is an ideology. That of never ceasing to reinvent oneself, and to always possess an open mind.

At SERIE NOIRE, we are passionate about our work. We honour the creators of Fashion : their designs, their histories, their ideas. We stand for sustainable fashion and encourage our clients to consume fashion in a different manner. With this approach, we advise our clients about building their wardrobes, their choices and about matching good pieces — pieces which become them, and which will become their timeless favourites. We are tuned in to the products themselves, and we consciously select pieces that touch us: well-built, in beautiful materials, and made by people as passionate as we are.

A historic and iconic building in old Lille

SERIE NOIRE is located down a historic refurbished street in the heart of old Lille, where the creative spirit of the city shines. We invested in a historic old building, and modernized it into 400 square meters of commercial space for our unique concept store. The interior spans three floors with a mezzanine and a suspended staircase inspired by contemporary aesthetics, and beautifully showcases the historic elements of the building, such as the stone and red brickwork typical of our region. The building itself inspires us in the choice of our collections, and becomes part of their development. Within SERIE NOIRE lies our own universe, where spaces, objects and collections are seen through the filter of our concepts.

SERIE NOIRE STORE and www.serie-noire.com are the same. All of our collections are distributed via these two channels. Our first site was created in 2006 and is fully translated into French and English. We were one of the first multi-brands to offer our own e-commerce site, and have been able to ship our collections internationally to our customers all over the world: from Paris to London, from New York to Tokyo.

Our website is designed to reflect our shop in Lille, and offers a unique, all-immersive digital experience.

The history of SERIE NOIRE, from our first shop on rue de la Bourse to our concept store on rue Lepelletier

Olivier Axer opens Série Noire on rue de la Bourse, in the heart of Lille. The shop sold vintage pieces from the Bensimon and Kiliwatch surpluses, along with relatively-unknown brands to many  at the time, such as Ralph Lauren, Mulberry, Tod's, Carhartt and many others.

The emblematic Paul Smith multicoloured bayadère stripe makes its debut at Série Noire, sparking a collaboration that has lasted more than 25 years, making Série Noire the English brand's oldest client in France. Since then, the British touch has always been in the DNA of the Série Noire style.

Our second shop "Série Noire Côté Rue" opens on rue du Curé-Saint-Etienne (today it is Philipe Gonay's hair salon). Here, Olivier sold the second lines (or "bis" lines) by Dolce & Gabbana, Jean Paul Gaultier, Paul Smith and others such as Bill Tornade and Vic Matié. "Côté Rue" remained open until 2003, when we shifted our focus to the Série Noire shop at 14 rue Lepelletier.

The shop expanded and its direction was aimed at a very specific "Designer" positioning: this was the embryo of what makes the concept so unique today.

Dolce&Gabbana and Prada arrive at Série Noire with pieces that reflected Italian elegance, refinement and perfectionism – suits were slim-fitting, and ties were obligatory.

A few seasons later, Prada Sport arrived under the artistic direction of Neil Barrett, as did the Miu Miu brand, under the same group.

Série Noire enriches its range with the designer Hedi Slimane as artistic director at Yves Saint Laurent. Slimane affirms Série Noire's rock inspirations with his Black Tie collection, and the debut of skinny trousers imposing a fitted masculine silhouette. Since then, Olivier has followed this revolutionary designer from brand to brand, when Slimane became artistic director at Dior Homme in 2006, and again at Saint Laurent in 2012.

In the same year, Barbara Bui brought her impeccable tailoring to our women's selection, with new details such as hooks on the back of jackets. Emmanuelle's choices have always been guided by the image of the chic modern businesswoman.

Emmanuelle is seduced by the Stella McCartney-Phoebe Philo collections,  not only by their iconic Paddington bag, silk blouses and vintage influences, but also the sensuality that radiates from an urban, emancipated woman. The image of the bohemian yet refined woman was a major influence on the Série Noire collections at the time.

This was a key year for Série Noire, when we moved to 14, rue Lepelletier, a building classified as a historic monument. Our shop has a new home on a busy old street, a 400 square meter space spread over three floors. This allowed Emmanuelle and Olivier to expand our range of designer offerings, welcoming brands such as Carpe Diem, Number Nine and the Italian shoe brand Premiata, still with us to this day.

The Maison Margiela brand makes its debut at Série Noire, with its confidential concepts of painted jeans and innovative cuts. The brand's iconic "Replica" trainers are a medium for creative expression. Nothing is random, and each piece requires extremely precise work.

2006 was another milestone year for Série Noire, with the launch of our website www.serie-noire.com, which opened our doors to an international online clientele.

We also welcomed the addition of A.F Vandevorst, Kris Van Assche, April 77 and Superfine to our collections.

Hedi Slimane's former assistant Kris Van Assche launched his eponymous label to reflect cross-disciplinary inspirations that soften the slim, minimalist silhouettes of his mentor. He creates this shift by combining the elegance of men's clothing with sneakers and other sporty details. We remember in particular his collaboration with Eastpack.

Belgian designers Ann Demeulemeester and Haider Ackermann join our collections. The Moncler brand of down jackets and Lanvin Homme arrive for the winter season.

We remember in particular the ultra chic Lanvin shirts with their laser-finished and grosgrain collars.

2009 saw the arrival of Rick Owens. The Californian designer presented his first collection in Paris and immediately caught Olivier's eye. Since then the Rick Owens brand, with its distinctively dark style and antifashion attitude has retained its strong identity and presence at Série Noire.

Balmain, under the direction of Christophe Decarnin, arrives at Série Noire, bringing with it the iconic multiple-stitched biker jeans. We also welcomed the arrival of new independent brands Giorgio Brato and their leather jackets, Marsell's leather shoes, the raw design jewellery of Tobias Wistisen and Japanese ready-to-wear label Attachment.

Série Noire once again offers Saint Laurent Paris when Hedi Slimane takes over its direction. Emmanuelle and Olivier loved the offbeat nature of the collections, which combined ultimate elegance with rock punk style. Lavaliers and studded ranger boots combine and contrast to create a capricious collection that is the perfect expression of the Série Noire universe.

Originally a denim brand, Acne Studios has evolved into a representation of the Scandinavian trend, and a permanent fixture in the Série Noire collections.

2014 saw the arrival of designers who have since taken places of importance within the Série Noire collections, such as Isaac Sellam with his craftsmanship and deep knowledge of leather work. Other specialist brands joined us in the next seasons, such as Scunzani's crocodile belts, Marchand Drapier's cotton shirts, Adieu's moccasins and the jewellery-sculptures of Charlotte Chesnais. This period also saw the arrival of Ten C, when Série Noire opened the door to technical and functional clothing.

With each new season, we come to love no less than a dozen new brands, such as: Isabel Benenato, MA+, Lost and Found, Avant toi, Mr and Mrs Furs, Pierre Louis Mascia and The last Conspiracy.

For winter 2016 Sonia Rykiel makes a brief appearance, and our "underground" designer selection expands with Label Under Construction, Letasca and 10 sei Oto.

2017 was largely influenced by the streetwear movement.

The Vêtement brand brought non-conformism, and Balenciaga turned its back on archetypes. Série Noire showcased the trend with Off- White, Hood By Air and 11 x Boris Bidjan Saberi.

Prune Axer, Olivier and Emmanuelle's daughter, becomes CEO of Série Noire. She is continuing her father's ambitions and is preserving the DNA of the company founded 40 years earlier, while imposing her own vision. She has revitalized the spaces and expanded our range of brands.

Série Noire has a new image and identity, with a brand new user experience on our website.

Our new logo is linear and uncluttered, and combines the brand with our Lille address. Our initials are also used in a more rounded version of our logo, like a hand-drawn image that evokes our preference for craftsmanship. The original three bars are retained in the different versions, representing the family trio.

We aim to transpose the in-shop customer experience to our international customers online, with greater accessibility in terms of imagery and ergonomics.

Femme
Homme
You need to login or create account